Writers have a long and complicated history with alcohol (see John Cheever or F. Scott Fitzgerald for further info), which may be why, when faced with the task of writing about alcoholic beverages, they pull out all the creative stops. 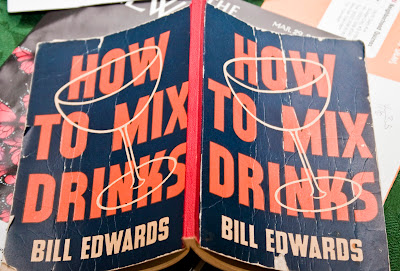 
Inventing a cocktail allows an author to be as hyperbolic as he or she would like to be when describing the taste and the effects. Read on for the best of the bunch. It's 5 o'clock somewhere.


Moloko Plus from A Clockwork Orange by Anthony Burgess

Alex and his droogie friends in A Clockwork Orange spend their slack time in the Korova milk bar drinking Moloko, or "milk-plus" --the "plus" being any one of a selection of near-futuristic designer drugs. Moloko may not contain actual alcohol, but the added vellocet, synthemesc or drencrom make Alex feel "knifey." Anything that leads to stomping hobos, putting the smackdown to random academics and leaving a newsstand covered in blood is apt to be pretty strong (and a long way from making risque jokes at the office party).

The Glasgow Kiss from The Cruise Connection by Peter Kerr

You wouldn't want to eat the food on mystery writer Peter Kerr's fictitious cruise ship The Ostentania (a severed finger is found in the quiche lorraine), but the drinks are plenty strong. So strong, in fact, that Kerr reports that a reader who didn't realize it was a joke imbibed a real-life Glasgow Kiss, landing him in the hospital. The ingredients for the drink (named for the Scottish slang for a headbutt): Scotch whisky, Drambuie, Southern Comfort, brandy, gin, vodka, tequila, Pernod, sweet sherry, port, cherry brandy, Archer's peach liqueur, Carlsberg Special, Coke, Buckfast Tonic Wine and Irn-Bru.

The cocktail is pre-mixed in a stainless steel bucket, then dispensed into glasses via hypodermic syringe just before serving. (Does "Do not try this at home" even need to be said?) [Note: If, like many outside the UK, you're unfamiliar with Irn-Bru, get a load of their TV ads. Some of the best/funniest in the biz.]

Drinking what is reported to be the most potent drink in the Universe, courtesy of Douglas Adams' Hitchhiker's Guide to the Galaxy, "is like having your brain smashed out by a slice of lemon wrapped round a large gold brick." Several adventurous mixologists have supposedly concocted real-life versions, but Adams says no way. "Unfortunately there are a number of environmental and weapons treaties and laws of physics which prevent one being mixed on Earth," he said in an interview. (Not to mention the fact that peach schnapps and blue curacao are no substitute for Arcturan mega-gin and Fallian marsh gas bubbles.)

The Electrick Floorbanger from Monstrous Regiment by Terry Pratchett

'Got no head for his drink,’ said Eyebrow. ‘Typical of the young bucks. Wants to play the big troll, comes in here, orders an Electrick Floorbanger, doesn’t know how to handle it.'

Suffice it to say that a drink that can knock out a troll is not one for the kiddies. Pratchett doesn't tell us precisely what goes into the makeup of an Electrick Floorbanger, but the trolls in his Disc World series tend to drink liquefied metals. Troll beer is ammonium sulfide dissolved in alcohol, so it stands to reason that the cocktail is, at the very least, like drinking a battery. Maybe with orange juice.

The Vesper Martini from Casino Royale by Ian Fleming

James Bond is pretty much synonymous with martinis, and the movies have ensured that we know exactly how he likes them. The first drink Bond orders in print, though, is an Americano. In Casino Royale, he deviates again from the martini recipe we know so well, ordering a concoction he says is his own invention: Gordon's, vodka and Kina Lillet (though his instructions are considerable more exacting.) "I'm going to patent it when I can think of a good name," he says, later naming it for love interest Vesper Lynd.

As this drink is actually re-constructable, try one, as Bond insisted, "in a deep champagne goblet," with a "large thin slice of lemon peel." You'll first have to shake the daylights out of it, but that's a paraphrase.

The May Queen from Uncle Fred in the Springtime by P.G. Wodehouse

If there were a literary prize for excellence in fiction featuring cocktails, Wodehouse would win the Lifetime Achievement trophy. Besides creating the iconic ne'er-do-well tippler Bertie Wooster (who once announced he would name his first child "Green Swizzle Wooster" in admiration of a cocktail he was particularly enjoying), Wodehouse also gave us a list of the 6 types of hangovers: The Broken Compass, the Sewing Machine, the Comet, the Atomic, the Cement Mixer and the Gremlin Boogie.

His most genius contribution to the fictional cocktail world, though, comes in the novel Uncle Fred in the Springtime, in the form of a concoction which has to be abbreviated as "The May Queen." The full name of the cocktail, as described by Lord Ickenham, is "To-morrow'll be of all the year the maddest, merriest day, for I'm to be Queen of the May, mother, I'm to be Queen of the May."

It consists, Ickenham says, of "any good dry champagne, to which is added liqueur brandy, armagnac, kümmel, yellow liqueur, and old stout, to taste." He adds that it's pretty much guaranteed to alleviate the deepest despondency.

Got a literary drinking anecdote? Leave it in the comments section. Unless it's the one about a drunken Tennessee Williams swallowing the lid to an aspirin bottle and subsequently expiring. Heard it.
Posted by Kelly Robinson at 5:17 PM