Another roundup of nifty things I’ve encountered around the web in my never-ending attempt to procrastinate as much as possible. Take some time to read the articles from whence these came, then get back to writing, for the love of Pete!

Poet Christian Bok believes in taking poetry to new frontiers, which is why he injected poetry-encoded DNA into bacterium, essentially making the microorganisms create their own poetry. He wonders about the limited subject matter of other poets:

“I am amazed that poets will continue to write about their divorces, even though there is currently a robot taking pictures of orange ethane lakes on Titan.”


Jane Litte at Dear Author has some book-related predictions for 2013, and though most are pretty serious, this one is a little more whimsical. I’m not sure if she’s right:


“Romance covers will become less focused on the man titty."


Dark Markets is a darned useful site for anyone whose writing tends toward the creepy. It’s not just a list of potential markets, though, but often has useful writing tips, such as this list of brutally honest advice from Lorna Keach. Read it all, especially if you agree with this snippet:

“If you are the kind of writer who does not read, your writing sucks.”


A lovely piece in the Granta blog by Yuka Igarashi talks about the minutiae of proofreading The Best of Young Brazilian Novelists, and how the task infected both her brain and her leisure time:

“Can a city be dust-covered and windy at the same time? Have we been consistent in the way we punctuate maté, Sugarloaf Mountain, the newspaper Folha de S. Paulo, the Candidates Tournament for chess and every one of the numerous international airports mentioned in the stories? Is it possible for a headless chicken to stare at you? Does ‘shithole’ have a hyphen in it?”


E-readers make reading a lot less dirty, but Wired writer Daniel Donahoo prefers the dirt, arguing that children's books are better when you can see where they’ve been:

“Our books should reflect the lives we lead — messy and uncertain, but well lived and loved.”


Should poetry and science be blended? Or are they already the same thing? What’s your take on the deeper symbolism of the prevalence of the man titty? Discuss.

Posted by Kelly Robinson at 5:18 PM 5 comments: Links to this post

Here’s why they should calm down.

Faber has published a new edition of Sylvia Plath’s The Bell Jar for the book’s 50th anniversary, and the internet is totally losing its shit. If that sounds like an exaggeration, consider some of these diatribes:


The general consensus seems to be that the cover denigrates the content, that it’s insulting to women and to women writers in general, and it doesn’t befit a classic. The cover to the original 1966 Faber edition, designed by Shirley Tucker, is being touted as iconic all over the blogosphere. It’s a good cover design, that’s true.


But it wasn’t the first one. Plath originally released the book under the pseudonym Victoria Lucas. That edition was published by William Heinemann Limited, and featured a rather feminine cover, with a loopy font and a woman-on-the-verge:


What people really seem to be forgetting is that both Tucker’s 1966 cover and the original Victoria Lucas cover are for the UK editions of The Bell Jar. Unless you picked up a copy in England, they're not the ones most Americans are familiar with, so the fawning nostalgia for the Tucker cover is partly contrived, Brits excepted. The novel wasn’t published in the US until 1971, where it was given this cover:


And this is paperback version many, including myself, first encountered in the ‘70s: 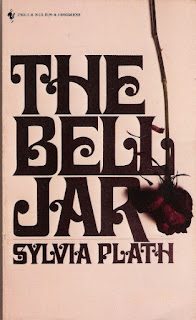 While the two US versions above may seem somber by today’s standards, they were very similar to the mass market covers marketed to women at the time. In fact, they bear a strong resemblance to the types of books my workplace used to label as “true insanity,” before the category was renamed something more politically correct.

The ‘70s American versions of The Bell Jar were designed to appeal to those who were enjoying sensationalistic novels and memoirs of women and madness, such as I Never Promised You a Rose Garden and Sybil. Even the stylized Gothic font on Plath’s book was a trendy cover convention in its day.

And guess what? We picked it up anyway, we read it, and we loved it.

If young women pick up the new edition because of the chick-lit cover, they’ll find plenty to like, from the moment on page one that they learn Esther’s patent leather shoes came from Bloomingdale’s. They’ll like that she interns at a fashion magazine -- a thinly-disguised version of Plath’s time at Mademoiselle. There’s plenty about her to appeal to young women today.

Hannah Griffiths, a publisher at Faber says it’s working: “We love it and the sales since publication suggest that new readers are finding it in the way that we hoped.”

I call that a success. It matters less that the cover appeals to me, than that it appeals to the sixteen year-olds of today.

What do you think of the new cover design? Are your panties in a wad? Or does it matter as long as it sells?
Posted by Kelly Robinson at 4:06 PM 16 comments: Links to this post