Jesus and Caligari: a Review of Upton Sinclair’s They Call Me Carpenter

I confess that I never knew much about Upton Sinclair beyond the fact that he wrote the meat-packing industry exposé The Jungle. It seems like a pretty big oversight on my part, considering that he wrote nearly 100 novels and also won a Pulitzer Prize—though not for The Jungle, as you'd think, but for the third novel in the Lanny Budd series (which is now out of print). I was also surprised to learn that he wrote the book on which Disney based the film The Gnome-Mobile, a childhood favorite that almost no one seems to remember (I was even accused once of inventing it). None of these facts are why I decided to read They Call Me Carpenter.

My interest originated with a reference in a book about horror film history, David Skal's The Monster Show. Skal mentions that Sinclair's They Call Me Carpenter uses a movie theater showing of The Cabinet of Dr. Caligari as a framing device. As a fan of silent film—and silent horror in particular—I knew I had to take a look.


The book begins with the main character, Billy, attending a screening of Caligari—"a futurist production, a strange, weird freak of the cinema art, supposed to be the nightmare of a madman"—in the fictitious Western City, California in 1921. The film has been recommended to him by his friend Dr. Henner.


"Being an American," Henner said, "you will find yourself asking, 'What good does such a picture do?' You will have the idea that every work of art must serve some moral purpose." After a pause, he added: "This picture could not possibly have been produced in America. For one thing, nearly all the characters are thin." He said it with the flicker of a smile--"One does not find American screen actors in that condition. Do your people care enough about the life of art to take a risk of starving for it?"


After seeing the film, Billy agrees with Henner's assessment that the film could not have been made America, as it is the product of "an old, perhaps an overripe culture"—which is not to say he didn't enjoy it. In fact, he offers several paragraphs of positive criticism, including:

“I had read many stories and seen a great many plays, in which the hero wakes up in the end, and we realize that we have been watching a dream. I remembered "Midsummer Night's Dream," and also "Looking Backward." An old, old device of art; and yet always effective, one of the most effective! But this was the first time I had ever been taken into the dreams of a lunatic. Yes, it was interesting, there was no denying it; grisly stuff, but alive, and marvelously well acted. How Edgar Allen Poe would have revelled [sic] in it!"


Still musing about the film and its meaning, Billy leaves the theater and finds himself in the midst of a mob that "might have come direct from the inside of Dr. Caligari's asylum." The protesters are livid that Caligari is making money for Germany. "Ya, ya. Boo, boo!" they shout. "German propaganda! Pay your money to the Huns! For shame on you! Leave your own people to starve, and send your cash to the enemy." Billy is incredulous at their fury, knowing that there's nothing anti-American in the film, and contemplates reasoning with them, but ultimately realizes a mob can't be reasoned with. He makes his way through the throng, but not without getting a nasty cosh on the head.

The theater riot is based in part on Hollywood history. When rioters became violent outside Miller's Theater in October of 1921, the management halted their exhibition of The Cabinet of Dr. Caligari after only a few performances, replacing it with silent crime drama The Money Changers. Upton Sinclair may well have become aware of this event because of the fact that the replacement film was based on his own novel of the same name. (As a side note pertaining to my interest in lost films, no reels of The Money Changers are known to have survived.)

After the riot, Billy takes refuge in a church, and here the novel changes into something I (perhaps stupidly) did not anticipate. I'd like to point out that I read this novel in e-book format, so I didn't have cover art as a clue, nor did my edition have the subtitle "a Tale of the Second Coming." Maybe "carpenter" should have made me take notice, but it's a common enough name. Suffice it to say, I was blindsided when the novel turned into a Christian allegory—something which likely would not surprise many other readers. (Even if they don't have the advantage of the cover art or subtitle, the book is still far better known for being about Jesus than it it is for mentioning The Cabinet of Dr. Calgari). 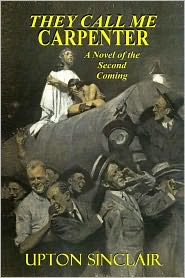 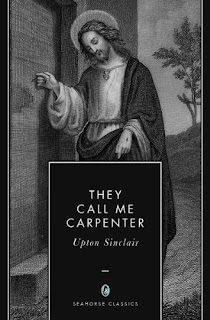 While in the church, Billy sees the stained glass representation of Christ come to life. Let's not forget that he's had a nasty wallop to the head, but other people also seem to see the man, who does indeed call himself Carpenter as it says on the wrapper. How well you like the rest of the book may have a lot to do with your relationship to religion, or how much you like rather obvious religious allegory. As the two cruise through Los Angeles (or Western City, rather) in the heyday of silent film, Carpenter gets to meet movie stars and directors, like the sultry Mary Magna—a vampy Theda Bara-ish stand-in for Mary Magdalene—and the film producer Abey Tszchniczklefritszch. He turns down a lucrative film contract, appalled at the treatment of the day laborers and the inequity of wealth. His experiences lead to trouble as he can no longer tolerate the injustices he views:

"Carpenter looked about the place, now lined pretty well with cripples and invalids. Only a couple of hours of spreading rumor had been needed to bring them forth, unholy and dreadful secrets, dragged from the dark corners and back alley- ways of these tenements. He gazed from one crooked and distorted face to another, and put his 'hand to his forehead with a gesture of despair. "No, no!" he said. "It is of no use !" He lifted his voice, calling once more to the masters of the city."You make them faster than I can heal them! You make them by machinery and he who would help them must break the machine !""


For me, the novel's saving grace (pun intended just a little) is the look at the silent movie-making machinations and how little has changed as far as exploitation, marketing, and general depravity. Occasionally there are touches of humor, but it, too, is often heavy-handed. I was a tad disappointed that there wasn't a return at the end of the book to the Caligari exhibition, which I had presumed based on the use of the term "framing device." The term was used correctly, just differently than I'd anticipated (and perhaps that was just as stupid of me as being oblivious to the subject matter, as the ending seems like I should have seen it coming).

It's also an interesting companion to The Jungle, with its obvious political agenda, especially concerning labor exploitation. (Sinclair, by the way, was surprised at the reaction to his most famous novel, which he had intended to point out the inhumane treatment of workers. Public reaction zeroed in on the unsanitary conditions in the meatpacking industry and largely ignored the labor issues. "I aimed at the public's heart," said Sinclair, "and by accident I hit it in the stomach.")

If you'd like to judge the book for yourself, it's in the public domain, so you can can score a free Kindle copy (or choose from an array of affordable used versions) at Amazon.com. You can also download it free on Project Gutenberg, where you can opt to read it directly, if you prefer.

*Written as part of the Friday's Forgotten Books event, hosted by Patti Abbott. (Will update with link to this week's entries when the list is posted, but you can still check out past reviews.)*